This summer brought record-breaking heat and drought that has strained grid infrastructure in Nevada. That’s because Nevada’s electric grid currently operates like an island — not able to easily share energy with its neighbors. But a regional transmission organization (RTO) would allow the state to tap into affordable clean energy from sources across the entire region, like hydropower from the Pacific Northwest and wind from Wyoming. It would also allow Nevada to export excess solar and geothermal when the state generates more power than it can use at the time. This grid efficiency and access to low-cost, abundant clean energy across the region would help Nevada keep the lights on in extreme conditions, and it would do so at lower electricity costs for homes and businesses. In turn, household and business savings would boost the local economy and create jobs not only in clean energy and transmission development, but also in diverse sectors across the entire economy.

To find out just how significant these benefits could be, AEE brought on Energy Strategies to model the economic impact a west-wide RTO could bring to the Silver State. Their analysis shows that joining a Western RTO was upside only, with the benefits far outweighing the costs to participate. Specifically, the report found that Nevadans could save about $32 million per year  in electricity costs compared to business as usual. Most of that extra money in resident and local businesses’ pocketbooks would stay in-state and enable the creation of as many as 21,300 permanent, good-paying jobs.

These jobs are in industries where consumers tend to spend extra income, like services, retail, lodging, food and drink, health care, and real estate, and in industries sensitive to electricity costs, like warehousing and storage, battery storage manufacturing, construction of new single-family homes and commercial buildings, medical and diagnostic laboratories, telecommunications, and data processing. This is particularly valuable for a state like Nevada, where robust tourism and a 24/7 entertainment industry dominate the economy.

Altogether, a western RTO would add between $550 million and $2.2 billion to Nevada’s Gross State Product each year. 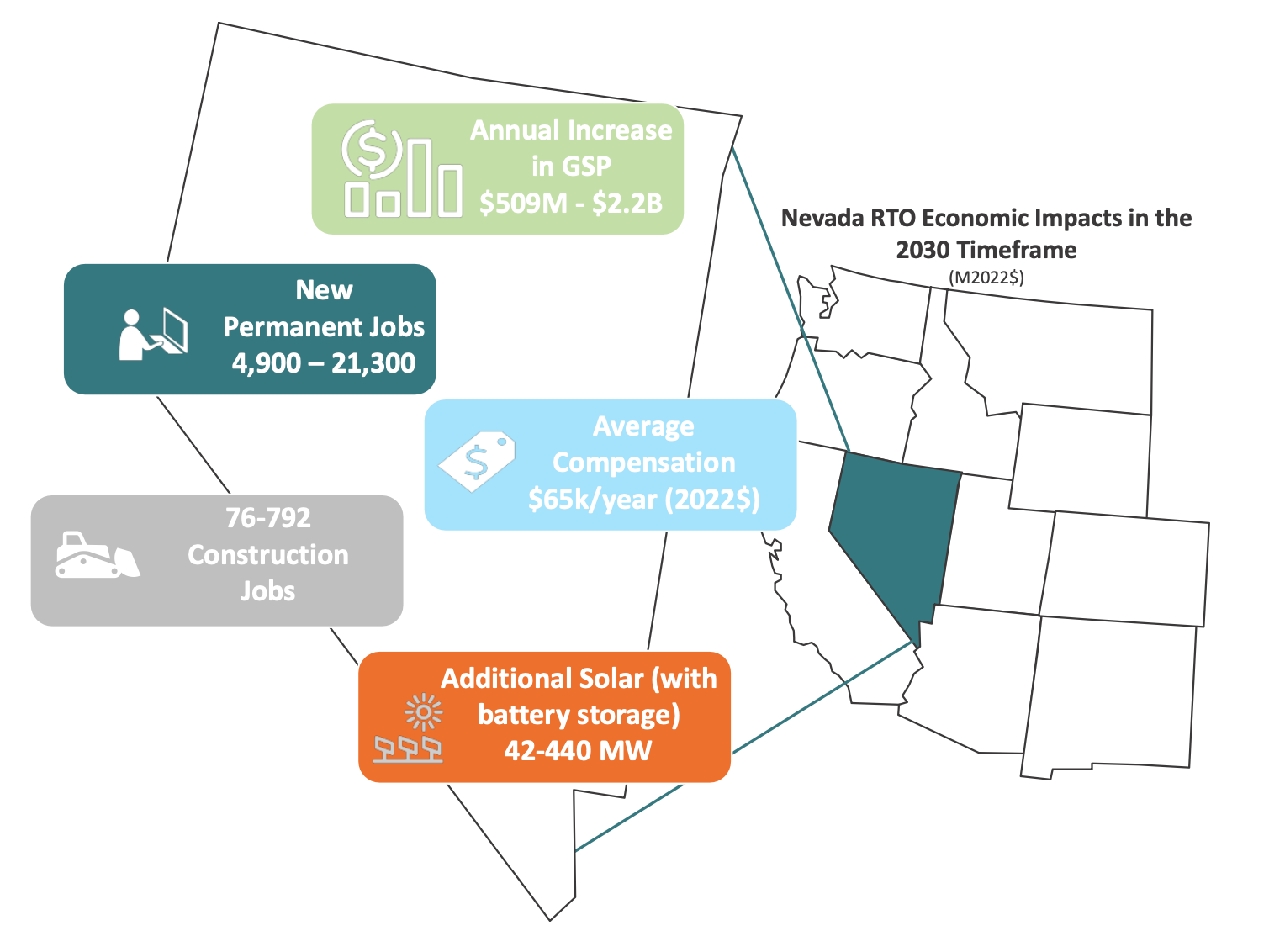 And, with so much untapped solar energy in Nevada, the state could develop up to 440 MW of additional clean energy to meet corporate demand. This would make Nevada especially attractive to companies looking to expand into states where they can get affordable clean energy to power operations and meet sustainability goals.