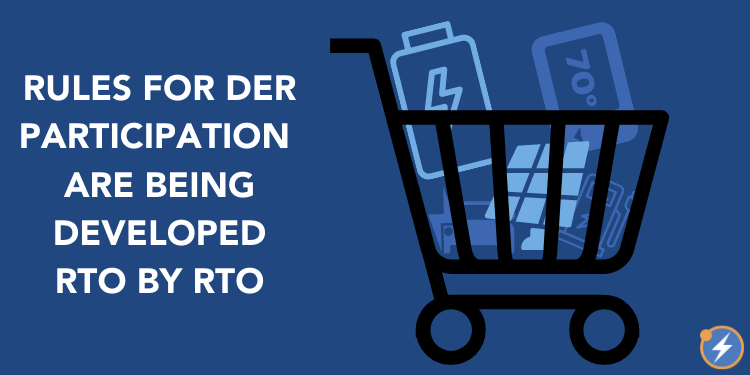 In September 2020, the Federal Energy Regulatory Commission (FERC) generated buzz across the advanced energy industry when it issued a long-awaited order (Order 2222) opening up wholesale energy markets to aggregated distributed energy resources (DERs). In a new report, AEE set out to illuminate the benefits Order 2222 can unlock by showing various use cases for aggregated DERs in wholesale markets. If grid operators, known as Regional Transmission Operators/Independent System Operators (RTOs/ISOs), create a level playing field, the Order could increase interest and investment in various DER aggregations, improve grid reliability, and lower consumer costs. But they’re just starting the process of developing the market rules to implement Order 2222, RTO by RTO.

DERs, which include small, flexible resources such as customer-sited batteries, electric vehicles, rooftop solar, and smart thermostats, have boomed across the United States. This growth has been primarily driven by customer demand, ambitious state policies, and basic economics as the cost of these innovative technologies has declined.  However, aggregated DERs have been largely left out of U.S wholesale power markets. In Order 2222, FERC recognized that the increasing number of DERs can be an important new resource to lower rates and improve reliability, and that removing barriers to their ability to enter wholesale markets will improve competition and lead to better outcomes for the grid and for consumers.

AEE’s report, "FERC Order No. 2222 and the Use Cases It Can Unlock," demonstrates how increased DER participation in wholesale markets will improve competition, lower rates, give customers greater choice, and provide needed flexibility that will support the reliability and resilience of our electricity grid. The use cases are examples of the actual DER aggregation projects that advanced energy businesses and consumers hope to pursue in the near term, and show that DERs are technically capable of providing a range of wholesale and retail market services, but need fair market rules to allow them to compete. The use cases include:

AEE’s report is intended to inform grid operators and regulators tasked with developing and implementing compliance plans to consider and adequately address the barriers that different types of DERs currently face. Across all the use cases, the report makes a few overarching recommendations to guide compliance plan development:

So how are grid operators doing when it comes to following these recommendations? It’s too early to tell. With the exception of California Independent System Operator (CAISO) and the New York Independent System Operator (NYISO), which had pre-existing plans for DER participation on a more limited basis, the RTOs/ISOs won’t hand over their compliance plans to FERC prior to deadlines ranging from February to April of 2022. Currently, grid operators are working with stakeholders to create compliance plans. Here is a breakdown for each RTO/ISO:

ISO-NE is arguably the farthest along in refining its compliance plan among the four RTOs that did not already have a DER participation model in place. Staff released an initial straw proposal to the Markets Committee and Transmission Committee in early February, and ISO-NE and stakeholders have been iterating on the proposal ever since, and will continue to do so until a vote is taken in January in advance of a February 2022 FERC filing deadline. In June, stakeholders including AEE presented perspectives and recommendations on ISO-NE’s proposal. Next month, ISO-NE will come back to stakeholders with revisions to its proposal.

PJM, the largest grid operator in the United States, is tackling Order 2222 compliance in the DER and Inverter-Based Resources Subcommittee. It shared an initial straw proposal with stakeholders in March 2021. While the grid operator's plan to comply with Order 2222 was initially due in July 2021, FERC granted an extension to February 2022. PJM plans to use this time to iterate on the design for DER aggregations. In the next several months, PJM will continue to receive feedback from stakeholders (including AEE on June 28) and update its proposal based on that feedback. Starting in December, PJM will begin drafting tariff language before making the final filing at FERC by February 2022.

MISO started up a new stakeholder venue, the Distributed Energy Resources Task Force (DERTF), to serve as a focused forum for stakeholders and MISO to address Order 2222 compliance. In the early months, MISO pointed to software challenges in implementing Order 2222. However, FERC approved an extension request, giving the ISO additional time to develop a compliance proposal. While the RTO initially intended to leverage existing participation models, stakeholders expressed concerns with this approach as it included limitations for new DER aggregations. MISO is now following PJM's example and sharing a full straw proposal with stakeholders at the monthly task force meetings. Staff debuted the first iteration of the proposal earlier this month and will continue to fine tune the compliance plan ahead of its April 2022 deadline.

SPP is also assembling its compliance plan through a new venue, the Order 2222 Task Force. Similar to PJM, MISO, and ISO-NE, SPP was granted an extension and plans to file at FERC in April 2022. Unlike the other RTOs, SPP is tackling compliance on an issue-by-issue basis. To date, conversations at the Task Force have been focused on the registration process for DER aggregations and on telemetry and metering requirements. Starting this month, SPP will also begin outreach meetings with distribution utilities to discuss coordination.

NYISO and CAISO already have DER participation models that were approved by FERC prior to Order No. 2222. They do not plan to seek extensions of the compliance due dates and will file in July 2021, although both grid operators plan to submit minor modifications to these plans to come into compliance with FERC’s order. CAISO's Distributed Energy Resource Provider (DERP) was approved in 2016, though it has not yet been used by aggregators; some of the barriers to participation in the DERP model are explored in AEE’s 2019 report, Putting Distributed Energy Resources to Work in Wholesale Electricity Markets.

With stakeholder processes underway, many in the industry are waiting to see if RTOs/ISOs develop plans that align with the spirit of Order 2222. While FERC’s order holds much promise for expanding investment in DERs and reducing energy costs, grid operators will have to work with stakeholders to create fair participation models that remove the barriers now preventing DER participation. Will these models provide an economically viable path to participation and give all DER aggregations the chance to compete? Watch this space.