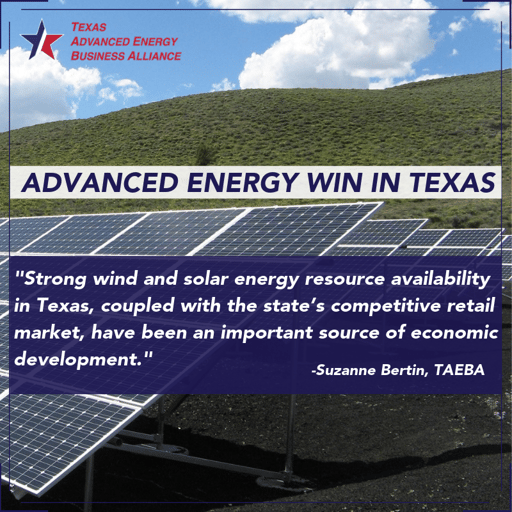 In a win for advanced energy, the Public Utility Commission of Texas (PUCT) declined to revise the current mechanism for allocating transmission losses at its Jan. 17 meeting, supporting a position taken by the Texas Advanced Energy Business Alliance (TAEBA). The PUCT also took another positive step by opening a review of EV-related issues to prepare for expected growth.

Transmission losses refer to the small amount of power that is always lost as electrons travel along transmission lines — the longer the transmission line, the more power is lost. Currently, the Electric Reliability Council of Texas (ERCOT) shares the costs associated with such losses equally among system generators. The proposed change would have charged more to distant generators, penalizing resources located in remote areas of Texas — such as wind and solar — where those resources are most abundant. The Commission’s decision to deny any revisions to the loss allocation mechanism allows for non-discriminatory access to transmission for all kinds of generation companies, regardless of where they are located on the Texas grid.

TAEBA had opposed the proposed changes, stating that “some individual resources could benefit while others would be worse off if the Commission moves ahead with implementation,” adding that the “the evidence points toward maintaining the existing average losses mechanism.”

In Chairman DeAnn Walker’s memo to the commission on the issue, she recommended against these changes, which would have altered the grid operator’s “security-constrained” economic dispatch order, saying, “I do not believe that the incremental benefit of applying marginal losses in the ERCOT market is worth the implementation cost and market disruption.”

“Strong wind and solar energy resource availability in Texas, coupled with the state’s competitive retail market, have been an important source of economic development,” Suzanne Bertin, managing director of Texas Advanced Energy Business Alliance, added in her statement after the decision. “As the nation’s emerging leader in corporate renewable energy, Texas is poised to maintain its leadership status.”

In addition to its decision on marginal losses, the PUCT also took steps to spur additional development to meet ERCOT market needs for the coming summer, including new self-generation and demand response. These included directing ERCOT to implement changes that would boost scarcity pricing for energy to draw more investment into the competitive ERCOT market, and also to move ahead with real-time co-optimization of energy and ancillary services, which would increase market efficiencies and also potentially provide additional opportunities for advanced energy companies. The Commission soon will be taking additional stakeholder input on issues related to real-time co-optimization

In another significant move, PUCT staff was instructed by the commissioners to open a new project to explore issues related to deployment of electric vehicles (EV), an action that TAEBA had requested in its comments on a prior open proceeding regarding the role of  non-traditional technologies in utility delivery service (PUCT Project No. 48023) . In this new proceeding, Project No. 49125, the Commission anticipates reviewing a variety of EV-related issues in two major  categories of issues – infrastructure and market impacts – ahead of the 2021 legislative session. TAEBA applauded the EV action.

“We were also very pleased to see Chairman Walker and the commissioners move forward proactively to get ready for the growing electric vehicle market,” said Bertin.

In other action, the PUCT put the rulemaking on non-traditional technologies on hiatus to allow an opportunity for the legislature to weigh in on utility ownership of battery storage, which has been a major point of controversy in that rulemaking and related prior proceedings.

Learn more about Texas Policy Priorities at the link below: