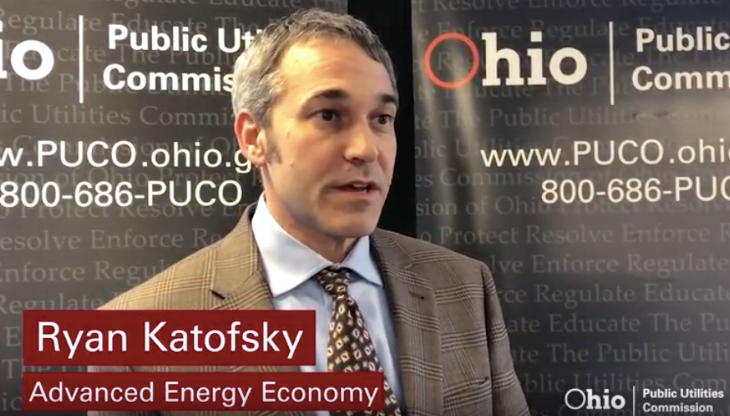 In April 2017, the Public Utilities Commission of Ohio (PUCO) launched PowerForward, an effort to study how Ohio could revolutionize its electrical grid, improve reliability and resilience, and incorporate new, innovative technologies in order to enhance the customer experience of all Ohio electricity customers. This initiative has called upon industry leaders to lead conversations ranging from integrating DER into the evolving grid to incorporating electric vehicles and their infrastructure onto the electric system, to redesigning Ohio’s ratemaking and rate design structure to inspire investments in innovative energy resources. AEE and its member companies have been right in the mix.

As distributed energy resource (DER) and large-scale renewable energy deployment increases, states are preparing to integrate these technologies into their existing systems and take advantage of the benefits they provide. At AEE, we have been advancing these conversations by bringing together public utility commissioners, utility executives, and energy technology experts to discuss ways to prepare for the evolving electricity system, as well as by participating directly in state initiatives, such as Illinois’ Next Grid and New York’s Reforming the Energy Vision proceeding.

Over the past year, the PUCO has hosted a series of workshops and informal discussions to bring this conversation to the fore. PowerForward has been broken into three phases: Phase 1, held over three days in April 2017, was coined “A Glimpse Into the Future”; Phase 2, held over three days in July 2017, focused on “Exploring Technologies”; and the most in-depth, Phase 3, was spread out into two three-day sessions in March 2018, focused on “Ratemaking and Regulation.”

Phase 1 heavily focused on what a future grid would look like and helped to lay the foundation for the end-vision of the initiative. Phase 2, took that vision a step further by delving into grid architecture and investigating the role of technologies in enabling a modern grid. And most recently, Phase 3, dove into some of the more nuanced and technical policy considerations such as distribution system planning and grid level marketplaces, electric vehicle integration, the role of energy storage, unlocking the value of data access, utility business model reform, and rate design.

A series of presentations from national utility and policy experts have driven the conversation and have led to the sharing of information and ideas that will help to chart a path forward over the next couple of years. At the most recent workshop, AEE’s own Ryan Katofsky and Danny Waggoner were invited to participate, providing the advanced energy industry perspective.

Katofsky focused his presentation on questions pertaining to business model reform, discussing ways for utilities to recover their costs for services, such as cloud computing, where utilities would traditionally not be able to earn a rate of return. (See video comments from Katofsky, and also CLEAResult’s Doug Lewin here.) He also touched on cost recovery frameworks that align the interests of utilities and customers so that utilities have a financial incentive to pursue DER and other service-based solutions rather than traditional poles-and-wires investments. (For more on this, see AEE’s 21st century electricity system issue briefs and white paper on optimizing incentives for capital- and service-based solutions.)

Waggoner discussed the importance of rate design and DER valuation in the changing electricity system. He also raised the importance of customer education and the role of technologies, such as smart thermostats and behavioral analytics, to facilitate the smooth adoption of new rate designs and to unlock the value that they can provide to customers and the grid.

Through their work so far, the PUCO has shown the value in bringing stakeholders to the table and in establishing an end-vision for transforming Ohio’s electricity system. As we await next steps in the PowerForward initiative, we heed the words of Chairman Asim Haque: “I assure you, this is not the end.”

AEE has prepared a series of six issue briefs that address how the power sector can successfully transition to a 21st Century Electricity System, as well as the white paper, below, "Utility Earnings in a Service-Oriented World."