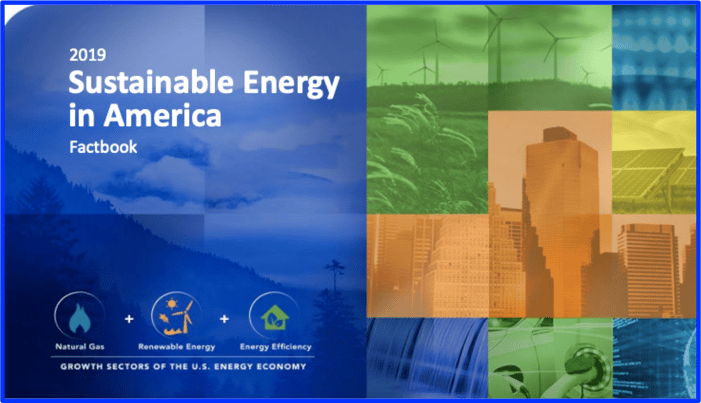 On Feb. 13, the Business Council for Sustainable Energy (BCSE) and Bloomberg New Energy Finance (BNEF) released their annual 2019 “Sustainable Energy in America Factbook,” a data-packed summary of U.S. and global energy markets. This year’s Factbook revealed that clean energy powered the U.S. economy with $64 billion in total new investment in 2018 (up 11% from 2017), energy productivity increased 14% since 2009, and the industry employs more than 3 million Americans.

Overall, the 2019 Factbook shows that in 2018, as the U.S. economy grew at its fastest pace in five years, these longstanding trends continued:

Factbook data showed that more businesses are realizing the economic benefits of advanced energy, with corporate procurements at an all-time high. In fact, corporate renewable energy contracts totaled 8.6 GW in 2018, beating the previous record of 3.2 GW. Of these, Advanced Energy Buyers Group members rank among top purchasers in 2018, with some AEBG members featured in the 2019 Factbook.