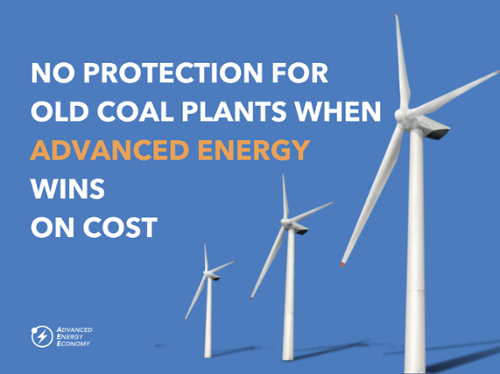 The Indiana General Assembly finished its legislative work in the late hours of April 24, capping a significant session for advanced energy. Although constitutionally obligated to adjourn sine die by April 29, lawmakers wrapped things up a few days early. With the National Rifle Association hosting its national meeting in Indianapolis, hotel rooms were hard to come by, so lawmakers had extra incentive to finish up. But the shortened session didn’t keep the advanced energy industry from claiming several successes, as legislation to provide additional market opportunities were passed while proposals to significantly impede the industry by protecting coal plants from replacement by advanced energy technologies were stopped. Here is Indiana AEE’s scorecard on this year’s session.

1) Coal is fighting back – but advanced energy is winning


The 2019 legislative session began just after the announcement last fall by Northern Indiana Public Service Co. (NIPSCO) that intended to close all existing coal operations by 2028 and replace the capacity with investments in wind, solar, storage, and demand-side resources, which the utility said would save ratepayers $4 billion. A recent report also showed that local investment in wind and solar would be more economical than maintaining half of Indiana’s existing coal fleet today, all coal plants by 2025. Based on market forces, utilities in Indiana were coming to realize that it was time to move away from outdated coal generation and invest in advanced energy options – a big step forward.

But coal interests were not taking this market reality lying down, and their legislative allies swung into action. House Utilities Chairman Ed Soliday put language into a water and sewer bill that would place a 20-month moratorium on Indiana Utility Regulatory Commission action on any matter involving more than 250 megawatts of generating capacity. This would have locked in Indiana’s coal-fired generation until January 2021 and prevented Indiana’s utilities from pursuing their plans for advanced energy investment.

Indiana AEE opposed this language, as did all of the state’s investor-owned utilities, business groups, consumer advocates, and environmental groups. In a surprise result, a Democratic amendment offered by Rep. Matt Pierce to remove the moratorium passed the Republican-controlled House on a bipartisan vote of 53-38.

The fight over preserving coal took on added drama when former EPA Administrator Scott Pruitt registered as a lobbyist for RailPoint coal, but the last-ditch effort to pump the brakes on retirement of coal for newer technologies went nowhere. While there were multiple attempts to revive this language before the end of session, they ultimately were unsuccessful, marking a significant win for advanced energy.

The legislature did establish a task force in HB 1278 to review and report on the changing energy landscape in Indiana, where this issue will no doubt rise again. While the majority of the task force will be comprised of legislators, there are seats available to industry, including one for someone with “expertise in renewable energy technology and deployment.” We expect public sessions of the task force to begin as early as next month.

Wind faced several challenges in the 2019 legislative session but emerged victorious. The most harmful bill was HB 1027, introduced by Rep. Tom Saunders (R-Lewisville). This bill sought criminal penalties for any public official who does not recuse himself from a vote or discussion where the official has a financial interest in a wind farm development. Indiana AEE actively opposed this bill, and discussed our concerns with committee leadership, particularly singling out one industry for criminal penalties, along with the radical nature of imposing a criminal penalty for voting on an issue. After Indiana AEE expressed our concerns, committee Chairman Dennis Zent agreed not to hear the bill, and it died in the first half of session.

Similar to HB 1027, SB 270 would have disqualified local elected officials from participating in a vote if the official has financial interest in the outcome of the decision. Though wind is not singled out, the bill was specifically drafted to impact wind development. With companies developing projects in rural areas across Indiana, commissioners and other officials representing those areas happen to own land within the footprint of wind projects. Despite the bill passing 40-0 in the Senate, the bill died in the House in the second half.

Not only were we able to prevent bad bills from becoming law, we got some important wind development legislation through the Indiana General Assembly. SB 535 repeals the authority of a municipality to exercise powers outside of its corporate boundaries. While not specific to wind, this legislation will keep neighboring municipalities from standing in the way of wind development in the “buffer zone” outside their city or town limits. This bill was supported by a broad coalition, including the Farm Bureau, Indiana Manufacturers Association, Indiana Chamber of Commerce, Indiana Association of Counties, and numerous wind developers, along with Indiana AEE. We also worked to move the effective date of the legislation back to January 1, 2019, preventing any municipality now trying to thwart a nearby wind development from using the effective date of the law as a loophole.

On the solar front, HB 1331, a bill to keep homeowners associations (HOA) from banning solar installations, did not pass after its third consecutive year of introduction. This prohibition would have applied only to rules and covenants adopted or amended after June 30, 2019, allowing older restrictions to remain in place. In addition to Indiana AEE, there was broad support from Citizens Action Coalition, Indiana Conservative Alliance for Energy, and some individual citizens for this going-forward measure to limit obstacles to rooftop solar. But the Indiana Homebuilders Association opposed the bill, and with the number of homebuilders elected to the legislature in the past 10 years, this became an impediment. While there was some movement toward the end of session, the bill was ultimately killed in caucus, behind closed doors. Nonetheless, strong momentum was built this year to get the bill across the finish line in 2020.

On the transmission and distribution front, HB 1470 passed quickly in the second half of session and was signed by Gov. Eric Holcomb. This legislation updates the existing tracker statute related to utility investments in transmission, distribution, and storage improvements. Trackers are adjustment mechanisms for utility rate changes outside a formal rate case. Currently, utilities are locked into investment plans for seven years. While consumer advocates were opposed due to cost concerns, the bill offers utilities opportunity to increase investments in advanced energy, particularly storage and advanced metering infrastructure, which are not adequately addressed in plans currently in force.

Our goal for this legislative session was simply to block harmful legislation. In that we were successful, but we were also able to pass some positive legislation. Between defense and offense, we were able to take important steps toward expanding the advanced energy market opportunity in Indiana by nearly $6 billion, based on AEE estimates. Looking ahead to 2020, Indiana stands out as a significant opportunity for advanced energy investment that will benefit consumers and the grid.