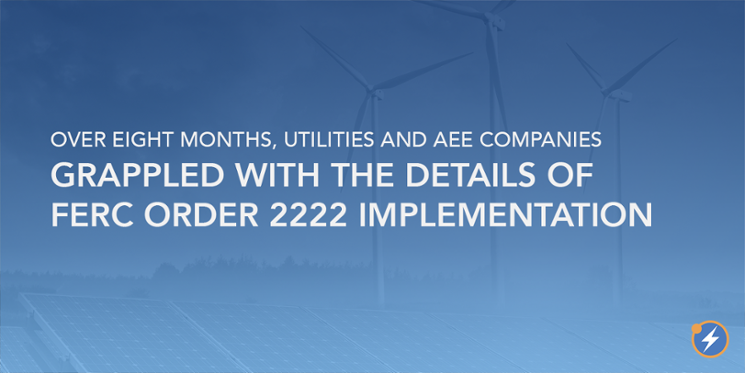 On September 17, 2020, FERC issued Order 2222, directing the grid operators under its jurisdiction to pave the way for aggregations of distributed energy resources (DERs) into wholesale markets. Recognizing that implementation of Order 2222 requires transmission and distribution system coordination and active engagement from state utility regulators as well, AEE and GridLab convened distribution utilities and AEE members for eight months to build consensus around key distribution system issues. The focus areas of the discussion included interconnection and aggregation review; communications, controls, and coordination; dual participation in both retail programs and wholesale markets; and investment recovery and cost causation. The result is a new understanding of the challenges in making DER participation in wholesale markets work, and ways that utilities, regulators, and industry can work together to overcome them.

The report, released in January, discusses strategies to empower state regulatory commissions and utilities, inform FERC and RTO/ISO processes, and support state policies that increase DER value. The recommendations in the report emphasize the importance of:

From this process, the group learned how valuable it is to have a frank, technically deep, and far reaching conversation among key stakeholders outside of a formal regulatory process. What’s not obvious from the report is the effort, intention, and hard work—from all stakeholders—that it takes to steward this type of conversation to a point of trust and productivity, and to move beyond superficial discussions that are based on generalities, myths, and fear. Bringing in outside guest speakers, such as experts from the Electric Power Research Institute, helped to keep the conversation grounded in the technical realm, leading us to understand, for example, that only utilities at the very bleeding edge currently have the capabilities to directly control inverters.

In controls, communications, and coordination, a primary focus was to think about how to support the utility’s mandate to maintain distribution system reliability and implement the utility’s right to curtail DER aggregations (DERAs) for reliability purposes (which Order 2222 cites). The group started by trying to understand what drives utilities’ concerns and fears about having more DERs on the distribution system and how they manage these concerns today. If it’s reliability, then what specific aspect of reliability? It was useful to dissect the problem into different dimensions: for example, thinking about what is needed in the beginning of a utility’s Order 2222 journey, versus in the long term when there may be a proliferation of DERs. It was also important to distinguish between:

We found it very useful to benchmark any proposed idea against current distribution utilities’ processes and functions, across planning and operations, and the space in between wherein lies interconnection. We found it useful, also, to distinguish power-injecting DERA from load modifying DERA. Going into this effort, one perspective on Order 2222 was that it was developed primarily to support power-injecting DERA; however, we came to know through this process that some companies, offering demand response only, are hopeful that Order 2222 will open up more opportunities to participate in the markets than were provided by an earlier FERC order on demand response (Order 719).

At the end of this process, the group’s recommendations took the form of “principles” rather than “prescriptive” proposals. The overall finding coming out of the technically focused working groups (controls, communications, coordination; and interconnection), for instance, is that it’s more about the process, in the near term, than it is about needing new software and hardware. And while no two utilities are the same, there are a set of common principles that utilities and regulators can use to assess if they are making logical and prudent decisions, whether about process or grid investments. To the extent additional investments are required on the distribution network, a five-step process for determining what these costs may entail through to allocation is recommended to regulatory agencies. Consistent with the theme of regulatory action, the dual participation working group suggests that regulators establish a process through which a utility can identify where duplicate compensation may occur and may want to refer to existing models such as from New York on this topic.

One of the hopes for Order 2222 may have been that wholesale market participation would simplify getting DERs onto the grid. But the physics of DERs—that DERs reside on the distribution system even if the financial arrangements are between aggregators and RTOs—cannot be ignored. The bright side is that once we solve some of these issues of coordination, we are solving them not only for DER participation in wholesale markets via the aggregator model specified by Order 2222, we might be solving fundamental challenges that will facilitate integration of DERs, regardless of the participation model, into the power system. That could be the bonus of Order 2222.

Priya Sreedharan is program director at GridLab and Josh Keeling is a director at the Cadeo Group.