CHP Provides Onsite Power for Industrial Customers, and Others

This post is one in a series of feature stories on trends that shape advanced energy markets in the U.S. and around the world. It is drawn from Advanced Energy Now 2017 Market Report, which was prepared for AEE by Navigant Research.

A CHP system at the University of Arizona.

For roughly a century, CHP systems have been reliable, cost-effective sources of power and thermal energy in both industrial and commercial building applications. Representing as much as 8% of U.S. electricity generation, CHP systems are used widely in manufacturing, hospitals, district heating, commercial buildings, and even residential applications.

Producing power and heat (separately) typically results in a combined efficiency of 45%. By contrast, CHP systems (also known as cogeneration) generate electricity and thermal energy in a single system, resulting in a combined efficiency as high as 80%. Gas turbines make up the largest share of CHP systems, often exporting power to the electrical grid, but it is not the only way for CHP to work.

Following five years of growth, from $20.8 billion in 2011 to $30 billion in 2015, global industrial CHP revenue slipped 3% in 2016, but still represented a $29.1 billion market (Figure 1). With more than 80 GW installed to date in the U.S alone – equal to the cumulative base of wind and nearly double that of solar PV – U.S. industrial CHP revenue continued its upward trajectory, increasing 5% to $3.5 billion in 2016, up steadily from $1 billion in 2011 (Figure 2). In the U.S. many projects were hurriedly completed before the CHP investment tax credit (ITC) expired on December 31, 2016. This credit, worth up to 10% of the system cost, has been an important driver of installations so ongoing efforts in Congress to reestablish the credit for 2017 are an important pivot point for the industry. 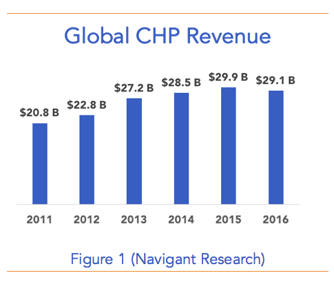 The lower natural gas prices afforded by the shale gas boom are an important driver of CHP installations, though the relationship is complex. Natural gas prices in North America approached historic lows in 2012-2016, which improved the spark spread, or the difference in cost per MWh of natural gas and electricity. This typically is good for natural gas, though caveats exist. First, grid electricity has gotten cheaper as more centralized natural gas generation comes online in response to low gas prices, eroding some of the business case for CHP. Paradoxically, the high efficiency of CHP can also be a hindrance with cheap natural gas: if CHP utilizes twice the energy per unit natural gas, the value of that efficiency is directly proportional to gas prices. Finally, volatility in natural gas prices can introduce financial risks that some facility owners don’t want to undertake. Still, many industrial customers see the value in CHP over the longer term and are willing to invest. For example, while US industrial customers saw electricity prices steadily rise by 49% from 2000 to 2015, natural gas prices were down by 12% (albeit with more volatility). Customers that can realize multiple value streams from CHP are thus willing to invest.

A growing business model in CHP is that of utility-owned deployments. While the legal issues vary by jurisdiction, many utilities see CHP as a way to cooperatively use customer facilities to meet their responsibilities related to capacity, energy efficiency, or flexible power generation. For example, in an effort to stabilize rising electricity prices, Florida Public Utilities Co. (FPU) worked with its industrial customer Rayonier to install a 20MW CHP turbine system in 2016. The system, called Eight Flags, is projected to produce electricity at $84.30/MWh, or 12% below the average local cost of wholesale energy.

In addition, the combustion turbine will be equipped with inlet air cooling to increase electric output during summer months – adding flexibility that will become ever more important for utilities and grid operators with the growth of intermittent renewables like solar PV. Other utilities are incentivizing CHP toward meeting their energy efficiency goals, which is not always the cheapest option, but can be attractive as low-hanging fruit like lighting and HVAC upgrades become saturated. One such utility is Baltimore Gas and Electric, which anticipates that 19.5% of its total Commercial and Industrial (C&I) electricity savings will come from CHP projects.

Industrial facilities account for more than 80% of existing CHP capacity in the United States – with more than 1,200 installations. Industrial sites are a strong match for CHP systems (of 20 MW in nameplate capacity) due to the presence of both high thermal and electric loads. There is also some potential in CHP using biomass, particularly in rural areas, where natural gas is too costly or not available, and in paper mills, where waste stock provides a source of fuel.

While large turbines over 20 MW dominate CHP in the U.S. (accounting for 90% capacity), there are three technologies that each are well suited as prime movers in CHP applications on a smaller scale:

Gas turbines will continue to make up the majority of large CHP applications, but there is a growing opportunity for stationary fuel cell applications in larger systems. One application is prime power, where the fuel cell is used for electricity or power and heat, ranging from 5 kW to several MW (though usually at a scale of 200 kW and higher). 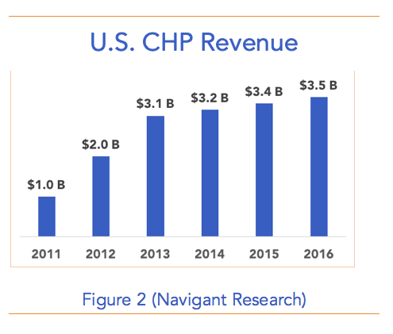 Large CHP fuel cell applications are found mostly in South Korea and the United States. CHP fuel cell units are used in the utility and C&I sectors. Hospitals and universities, with their campus configuration and high thermal demands, install CHP in growing quantities with fuel cells accounting for a growing share. Multi-family residential structures also represent a large opportunity in this segment. For example, Doosan Fuel Cell America is working with the local utility to install a large CHP fuel cell at a multifamily residential development in Busan, South Korea. Sized at more than 30MW, it is projected to be one of the largest fuel cell installations in the world.

Navigant Research forecasts fuel cell capacity for CHP will grow fastest in Asia Pacific, with Japan (and to a lesser extent, China and India) joining South Korea as the next most attractive markets. As a relatively mature market, the United States is expected to continue growing at close to historical trends.

Learn more about CHP and all the rest of the advanced energy market by downloading the free report at the link below: